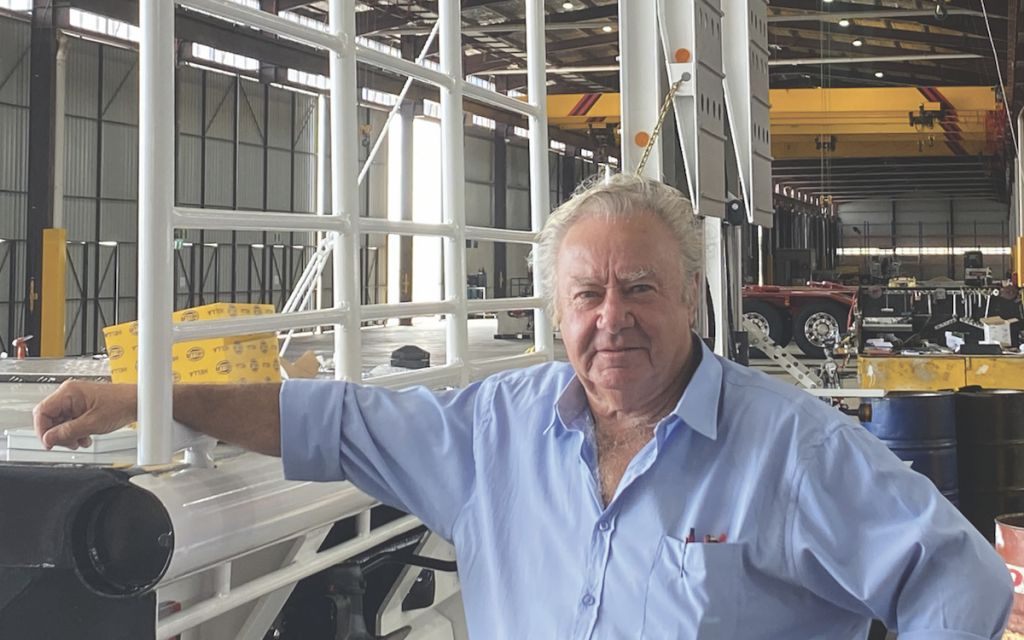 Having started an apprenticeship as a boilermaker / welder at age 15, Lionel Moore progressed to owning his own trailer building business, which has gone on to produce a vast number of trailers for many customers across Australia.

Lionel Moore began his career in the road transport industry in 1964, serving his apprenticeship at O’Phee Engineering, which later became known as O’Phee Industries, in the small rural Queensland town of Brookstead.

He worked for Bill and Jim O’Phee for 24 years and in 1988 started his own business – Lionel Moore Trailers – in rented premises at nearby Pittsworth in the Toowoomba region.

As for the biggest changes in the industry, Lionel mentions the transition from bagged to bulk grain haulage in the late 1960s.

“This was revolutionary, and I was fortunate to be heavily involved in designing and building bulk grain tippers at that time – which remains the core of my business today.”

On Performance-Based Standards (PBS), Lionel believes this initiative has brought positive change to the design and performance of trucks and trailers.

“Great ideas such as the drop chassis bin and the rigid drawbar dolly have dramatically improved on-road stability,” he says.

Asked who he particularly admires in the industry, Lionel cites his original employers.
“Bill and Jim O’Phee, bless their souls, were both highly skilled and taught me most of the things I know.

“These guys could design and build anything from just a sketch on the concrete floor.
“I feel that it was this upbringing which gave me the ability to fearlessly design and build all the crazy trailers that I have built over the years.”

As for memorable industry-related stories, Lionel shares that he had quite a hand in the establishment of the Guinness World Records for the longest road train at Clifton in February 2006.
“There were 113 trailers – 80 of them were Moore – pulled 150m by a Mack Titan driven by John Atkinson. It took us two days to assemble all the trailers and dollies into a complete roadtrain that stretched for nearly 1.5km.”

Among Lionel’s other achievements are that at age 67 he gained approval to certify the trailers he builds for compliance.

“It took me three years to complete the courses and after building trailers for 57 years I now have the authority to certify them,” he proudly concludes.