Industry Icon: David Oliver – Taking it to the next level 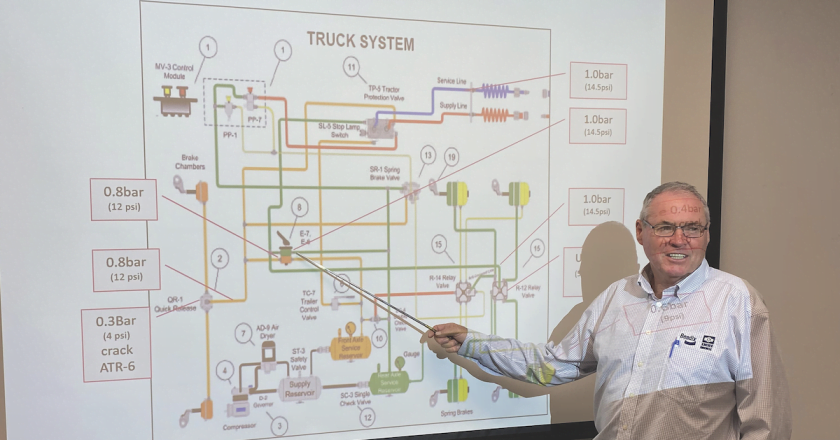 After completing a mechanical apprenticeship in New Zealand in the mid-1970s, David Oliver worked in a number of roles before returning to the road transport fold in the early 1990s, running a small hydraulics and pneumatic engineering company.

In 2001 David joined Bendix Mintex in Melbourne as its Commercial Vehicle Systems (CVS) National Account and Training Manager before joining Knorr-Bremse Australia in May 2004 as its Sales Engineer based in Brisbane.

Asked his opinion on the greatest changes he’s witnessed, David says the widespread use of trailer EBS (TEBS) has led to a remarkable improvement in brake compatibility between trucks and trailers.

“The mandating of TEBS on new trailers since 2019 has been a huge step forward, with many fleets upgrading their trailers by retrofitting the potentially life-saving system,” he says.

Performance-Based Standards (PBS), according to David, is another notable development that through innovation and thinking outside the square has seen the proliferation of combinations that operate safely with significantly improved productivity.

“Of note are improved swept path and greater stability with multi-combinations, using TEBS to manage steer axles, suspension, load information and a myriad of other functions,” he says.

As for who in the industry he admires, David says Les Bruzsa, Chief Engineer at the National Heavy Vehicle Regulator (NHVR) is right up there.

“I have a great respect for Les – when he talks, you listen. Also, stalwarts of our industry such as John Drake, Graham Lusty and Denis Di Pasquale and their respective trailer design teams; their designs are both innovative and exciting,” he says.

Asked about his greatest achievements, David says in 2012 he played a leading role in the development of a TEBS braking control system on an ‘eight rows of eight’ platform trailer with hydraulic suspension for Tuff Trailers.

“People said it couldn’t be done, saying if it could, it would have already been done. I ignored them and did it anyway,” David says.

“Since then, we have developed multiple TEBS systems for bespoke hydraulic and air suspension trailers from tri-axle up to ten rows of eight with steerable axles – which has been adopted by all the key builders of low loaders in Australia.”

« Industry Icon: John White – A Leader in the Field