It was an unusually windy day in the spring of 1983 when a group of journalists, policemen, council representatives and local businessmen got together in an abandoned yard in Port Melbourne to witness trucking history in the making. The sooty dirt was whirling about like a sandstorm when a strange-looking truck rolled on to the vast dust bowl and began circling around the silent crowd like a giant steel shark, tightening the radius with every lap.

“You could have cut the atmosphere with a knife when the truck rolled through the gate,” recalls Bob Pearson, who had organised the demonstration day in the hope of ending a merciless media campaign against Australia’s latest High Productivity Freight Vehicle (HPFV), the B-double, which had been dividing the local community to a point where it could have put the entire project at risk. “But with every lap, the whole situation became more relaxed. For a truck, the B-double moved almost gracefully. There was no swerving, no tipping, just steady movement.”

At the end of the demonstration, with the sun burning brightly from the sky, Bob says the group experienced a “collective light bulb moment” that would lay the foundation for what has to be considered the most revolutionary development in Australian road transport to date: The B-double had arrived, even though it would still have many political hurdles to overcome, especially in Victoria.

“It was a crucial moment. The Age had called the B-double a ‘road monster’ before and had published a provocative photo showing it to be as long as four-and-a-half Ford Falcons,” he explains. “Only by having everyone experience the concept first hand were we able to turn it all around.”

What followed was a series of live demonstrations around the country, with Bob insisting they would not just involve media and council officials, but also local community identities to ensure there was “some grassroots buy-in,” as he puts it – a concept that the National Heavy Vehicle Regulator (NHVR) is still applying today in order to promote access for vehicles designed under the Performance-Based Standards (PBS) scheme.

“We always knew our case for the concept was strong enough from an engineering point of view – there was, and still is, nothing safer than a B-double,” he adds. “Convincing the public and getting the emotional dimension right was the real challenge.”

Once the media storm had passed, Bob says the B-double did not just change the way freight was carried in Australia, but also the attitude officials were applying to road management. “In hindsight, I have to say the 1980s were an incredibly progressive period,” he says. “When the B-double was being considered, the focus moved away from road protection to road management – a truly innovative development we currently see being undone again, if you ask me.

“Back then we had specialists who knew how to evaluate infrastructure properly, which was a prerequisite for HPFVs to emerge. Today, because of PBS, I fear we are heading towards office-bound managers that are much more detached from what’s going on out there, and the whole thing is swinging back to where we started. It’s important to remind ourselves of where it all started, and never forget where we came from.” 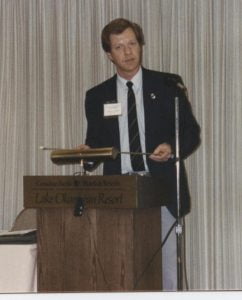 This article was first published as part of Trailer Magazine’s Industry Icon series, which is dedicated to honouring the unsung heroes of commercial road transport – the people and businesses that form the backbone of our industry and keep pushing the boundaries to ensure Australia will remain at the very forefront of innovation. Based on an idea by Smedley’s Engineers, the fourth instalment of the series explores how Bob Pearson, one of the masterminds behind the B-double, tried to convince mainstream media and the general public of his revolutionary ‘high productivity vehicle’ idea.